Late last week, I came back from a week’s vacation and was immediately thrust into the whirling dervish. There was a report that needed to go out and a colleague of mine was feverishly editing it. She brought it to me and said, “I can’t figure out this sentence. Is it ‘have’ or ‘has?'”

Oh, that age-old dilemma, I thought. Let’s see it. And then she handed me the most convoluted run-on sentence I have ever read. Note to alert readers: don’t let academics write things. They just can’t.

Anyhow, I said, “Well, let’s diagram it.” I got looked at like I was nuts. 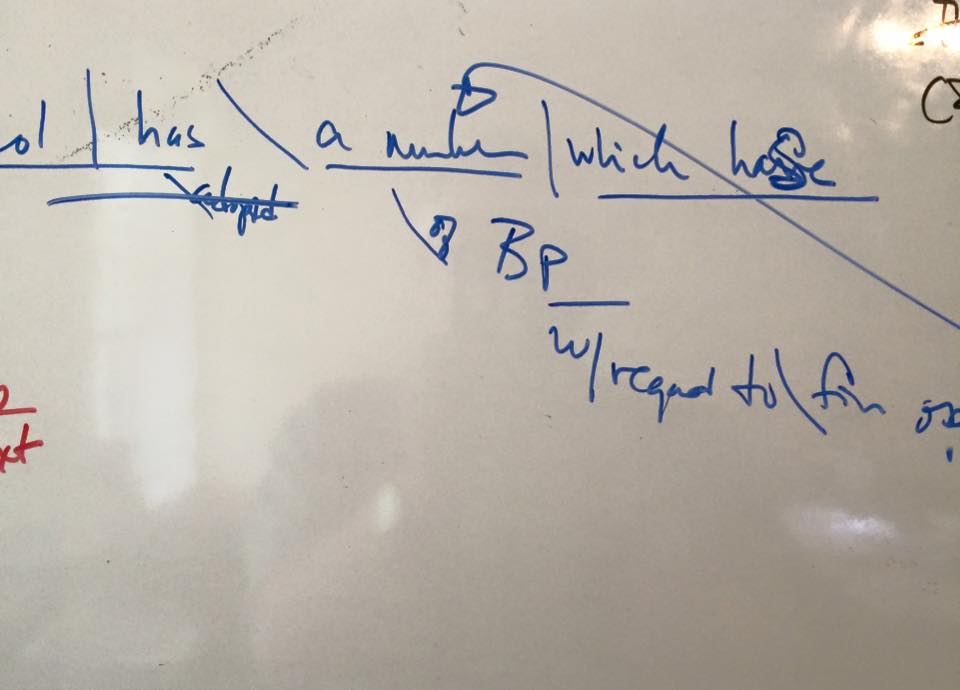 My recent sentence diagram. Not as elegant as some, but it got the point across and solved the problem. For the record, the correct verb was “has.”

The art of the sentence diagram is something that’s been all but dropped in American school curricula. In fact, I probably shouldn’t have learned it either, given the tenor of the times, but I was blessed with a few crusty old English teachers who drilled it into me. (By the way, “blessed” is NOT the word I would have used in the 8th grade! “Cursed” would probably be more accurate!)

“When you’re learning to write well, [diagramming] helps to understand what the sentence is doing and why it’s doing it and how you can improve it,” says Kitty Burns Florey, author of Sister Bernadette’s Barking Dog: The Quirky History and Lost Art of Diagramming Sentences.

In a 2014 interview with NPR’s Juana Summers, Burns Florey declares that there are two kinds of people in the world: ones who loved diagramming and ones who hated it. I was mostly in the pro-diagramming camp, but I really didn’t appreciate it until I was older and could see the benefit to a writer/editor of being able to deconstruct sentences.

Who knows? Maybe I’m just weird. After all, I got A’s in Geometry, too!